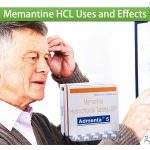 Memantine is a medication specially formulated for the treatment of moderate to severe dementia. It is meant to help people with Alzheimer’s to manage activities of daily living better.

The symptoms of Alzheimer’s disease can be challenging to deal especially, for individuals who keep on losing the ability to manage daily tasks. Alzheimer’s disease is a brain disorder that gradually destroys an individual’s ability to remember things and communicate normally. The diagnosis is based on clinical features and requires hospitalization for brain examination. Patients who have Alzheimer’s needs doctor’s supervision for daily activities. Currently, there is no cure for Alzheimer’s, but there are different treatment options that aim to slow down the progression of the brain disorder. A number of drugs including donepezil, galantamine, rivastigmine, antipsychotics, anti-depressants, and vitamins are used for symptomatic control. Current studies focus on memantine and its mechanism of action;

How does Memantine work to treat dementia?

Research studies show that memantine delays the worsening of mental performance, including abilities to learn, remember things, and other abilities in daily life. Other psycho-therapeutic procedures such as memory training and the encouragement of social activities may improve memory. Memantine HCL belongs to the class of drugs known as N-methyl-D-aspartate (NMDA) receptor antagonist. The exact mechanism of action of memantine is still not understood; however, it is not like other drugs that are mentioned above and therefore has a different mode of action from drugs currently used to treat symptoms of dementia. Memantine is an NMDA receptor antagonist; it works by decreasing the amount of abnormal activity in the brain. Clinical experiments suggest that people who have developed Alzheimer’s symptoms might also have too much glutamate in their brain. Memantine HCL reduces glutamate toxicity and prevents the killing of nerve cells, without disturbing the function of nerve cells. The drug has been approved by US food and drug administration for treatment of moderate to severe Alzheimer’s disease. Moreover, memantine is useful in treating different forms of dementia in patients suffering from Alzheimer’s. The medicine is not a cure, but it helps to slow down the progression of the disease in moderate to severe cases.

Memantine was first found to produce effects on the central nervous system. Since then it gained popularity and has proven effective in individuals with Alzheimer’s disease. Patients who have symptoms of confusion or other cognitive disabilities may take this medication and slow down the disease from reaching to appoint from where you can’t come back.

What are the symptoms of Alzheimer’s?

Unfortunately, there is no cure for Alzheimer’s disease. Unfortunately, people who suffer from this brain disorder eventually experience cognitive impairment. Since the disease progresses slowly, drugs like Memantine HCL help these patients to regain some of their cognitive abilities that will help you perform simple tasks. The brain disease slowly enables you to carry out even simple daily tasks, including walking, bathing, wearing clothes, etc. Alzheimer’s disease cause cognitive impairment, memory loss, confusion, loss of thinking, and trouble in understanding images. Memantine can delay the worsening of some cognitive abilities. The ability to manage daily activities such as brushing your teeth, bathing, getting dressed, or taking a bus to worsen over time. Studies suggest that the NMDA receptor antagonist could be a suitable strategy to delay this process. This shows that the medicine helps delay cognitive performances such as learning or remembering things. It may take up to six months to delay the worsening of Alzheimer’s symptoms. According to some research studies, the drug is also effective in relieving severe. However, no enough evidence can suggest how long people with Alzheimer’s can still care at home. There is no information if the treatment helps to lessen the need for care or lessening the emotional stress on your loved ones at home. you can buy
Alzheimer’s medication online from premium rx drugs at affordable price.

Physical medicine and rehabilitation (also referred as Physiatry) is related to evaluation, treatment, and medical management and rehabilitation of individuals of all ages and both sexes with neuro-musculoskeletal disorders and associated conditions. The aim of physiatry is to increase and restore lost functional ability and quality of life of those who have been disabled as a result of disease, disorder, or injury.

Physiatrist treats disabilities and injuries by nonsurgical means such as:

Using a multidisciplinary approach, physiatry covers everything from cardiac rehabilitation to pain management. Physiatrists treat the whole patient, not just the symptoms. They help patients understand their condition by sharing their medical knowledge. A variety of treatment methods can be used to eliminate your symptoms. These health care specialists improve the life of millions of people every year.

Psychiatrists evaluate patients within hours of a major disease or injury; they have the satisfaction of coordinating not only their patient’s rehabilitative care but also over time, their community reintegration and back to work. After evaluating a patient’s medical history and obtaining physical examination findings, physiatrists are able to determine the extent of physical and cognitive deficits and also assess the functional implications of a patient’s impairment. Laboratory studies, radiographic imaging, and electrodiagnostic evaluations can be considered to assess the extent of the patient’s impairment.

Specialists in the field of physical medicine and rehabilitation are well trained in the assessment and prescription of prosthetic limbs or braces, as well as in the prescription of physical agents such as ice application, massage, superficial and deep heat, etc. Moreover, they are well trained to manage medical complications resulting from abnormalities such as autonomic hyperreflexia, spasticity, and neurogenic bladder. These experts in physical medicine and rehabilitation perform intravenous injections and peripheral nerve blockade in addition to nerve conduction studies and electromyography.

The early and later symptoms may vary in the severity. The first signs are:

The signs of later stages of Alzheimer’s:

Changes in brain during Alzheimer’s disease:

During the ageing process and Alzheimer’s disease, two abnormal structures called plaques and tangles are formed that damage the nerve cells.

The destruction and death of the nerve cells with the build up of these proteins causes the Alzheimer’s disease and other symptoms dementia.

Who is at the risk of getting Alzheimer’s disease?

There are a few common risk factors that can initiate the beginning of Alzheimer’s illness and they are:

The risk genes, APOE-e gene, APOE-e4 or APOE-e 2or APOE-e3, are known to cause a risk to develop the Alzheimer’s disease, in case, two copies of this gene are inherited.

The deterministic genes are very rare and found only in the few extended families of the world.

Some other risk factors are:

There are a few other causes of memory problem that arises with Alzheimer’s disease:

No such test can examine the presence of Alzheimer’s disease.  The patient’s condition  is usually diagnosed with the help of a few common tests including the analysis of the symptoms, some neurological tests and a few physical tests such as:

There is no cure for Alzheimer’s disease up to this date. The scientist is still working on finding the ways to prevent the damage of nerve cells in the brain. A few drugs are available to control the symptoms of Alzheimer’s disease, and they are FDA approved also. The Alzheimer’s medication list is as follows:

These Alzheimer drugs are available online also, in case you find difficulty in finding the drugs in your locality. Although Alzheimer’s is an incurable problem, still there are a lot of things that can be done to improve the condition of the patient.  The Alzheimer reviews show that drugs, support and more physical and mental activeness of the patient can improve the status of the patient to several folds.

Alzheimer’s disease (AD) is a condition which damages brain cells resulting in memory loss, thinking and language skills, and behavioral changes. It was first described by Alios Alzheimer a German pathologist. It is a sixth leading cause of death in America. Unfortunately there is no way to stop its growth and it keeps on rising with time.

Memory loss is the first sign of disease condition. With advancement in disease there is increase in memory loss and along with that a person will experience mood swings, increased sleeping, seizures, anger, anxiety and overall personality changes.

Exact reason is still unclear but abnormal amount of protein present in brain reduces the activity of nerve cells makes them weak and eventually leads to its destruction. Aged persons are more susceptible to this condition along with that genetic tendency; lifestyle and environmental factors such as heart disorders, stroke, diabetes and obesity are one of the causes of Alzheimer’s disease.

In early stages, it can be diagnosed by simple memory test, personality and behavior changes are observed. For advanced stages Computed topography (CT) or magnetic resonance imaging (MRI) are generally done which clearly shows the degenerated status of brain.

There is no effective way to prevent the disease but one can reduce the risk by lowering heart related diseases, regular exercise, eating right and staying mentally and socially active. High intake of supplements pep up the Brain cells and its activity such as

This disease is incurable. The basic approach of the treatment is to prevent or delay the signs and symptoms.  There are four USFDA approved drugs which improves the thinking, memory and speaking skills.

Along with these drugs, proper care is a key factor which can make living little easier. A caregiver should try to maintain a healthy lifestyle of a patient by keeping positive environment all around, a proper nutritious diet and making him socially and physically active.

FACT: Exact cause of AD is still unknown it could be due to genetic bent or hypertension. There are certain ways which prevents the brain function impairment such as change in lifestyle, proper diet, mental and physical exercise, positive thinking, and stress free life.

MYTH:An x-ray of the brain can diagnose Alzheimer’s disease.

FACT: An x ray cannot diagnose the brain changes. General mental tests, physical examination and techniques like MRI and CT scan can rule out the condition.