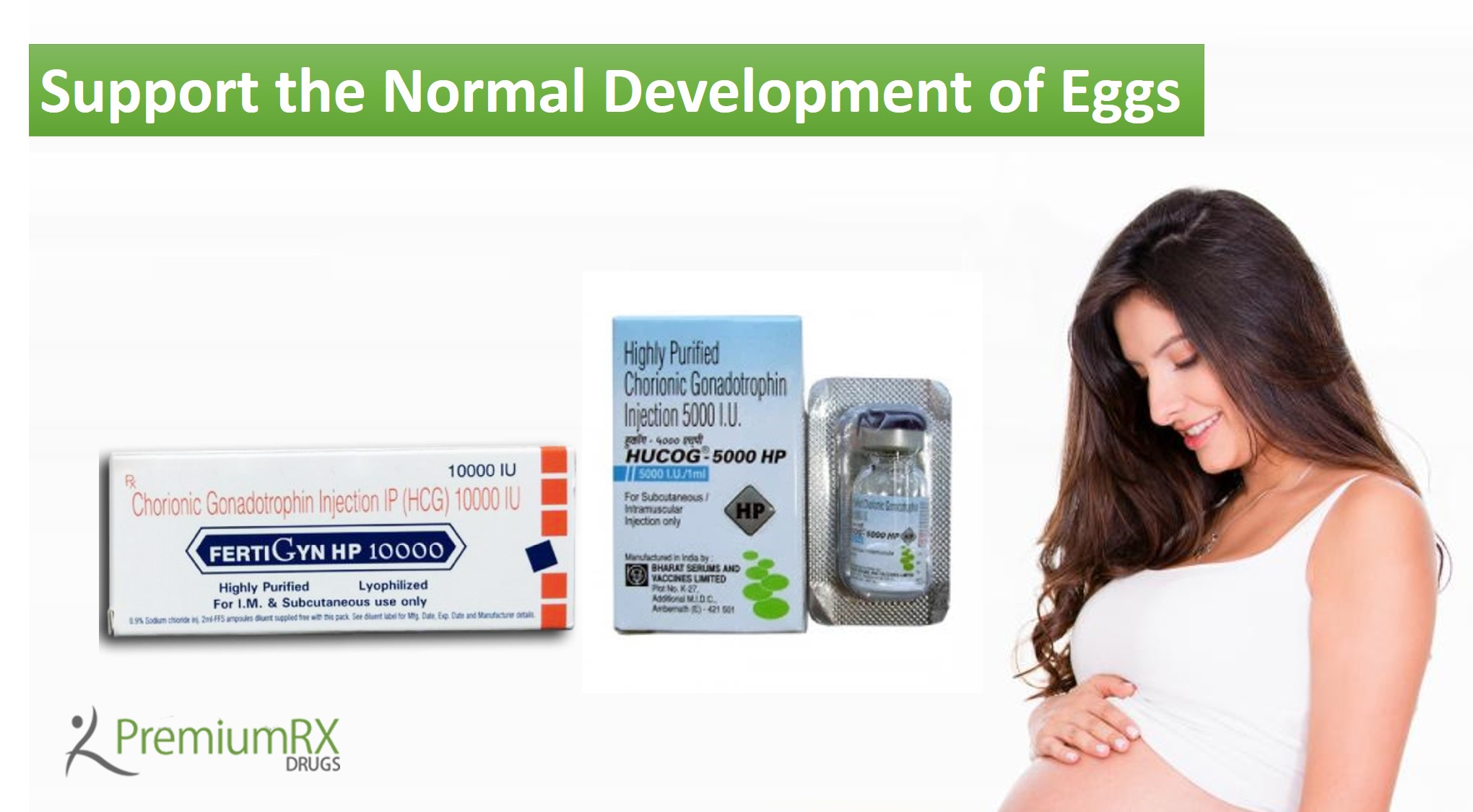 Pregnant women produce human chorionic gonadotropin or HCG hormone. This is the reason some people refer to it as a hormone of the pregnancy.

Human chorionic gonadotropin (HCG) is used in women to support the normal development of eggs in the ovaries and makes way for ovulation. It stimulated egg production during the process of ovulation. With its regular intake, women experiencing infertility issues get pregnant and often able to improve their egg development. The medicine helps men to increase sperm count. Couple by using HCG at the same time greatly decreases the waiting period for becoming parents. Some couple chooses HCG and put down other conceptions down, leading up to the pregnancy. Few women complaint of having discomfort after using HCG and it can range from mild to severe pelvic pain. In rare cases, a woman may be diagnosed with ovarian hyperstimulation syndrome (OHSS). The rare conditions usually occur after the first dose or in the early stages of use. The use of HCG shots has also been reported to increase the risk of having multiple births. Women who are prescribed with HCG to get pregnant are advised to discontinue treatment immediately they get pregnant as this can contribute to birth defects in children. Checking pregnancy status regularly is very important.

Features and Functions of HCG

HCG hormone is secreted by the cells that surround the developing embryo, and these cells will finally proceed to form the placenta.  The presence of hormone can be detected in the urine after the implantation of the embryo in the womb.

During the process of ovulation, when the egg is released from the ovary, the remaining part of the ovarian follicles from a corpus luteum, an ovarian gland which produces a hormone called progesterone. If the egg is not fertilized after two weeks, the ovarian gland stops progesterone production leading to break down. This signals the production of stimulating follicle hormone (FSH) from the pituitary gland in order to begin the next menstrual cycle. However, in the procedure, when the sperm and an embryo fertilize the egg is implanted in the uterus, it is necessary for corpus luteum to produce progesterone continuously until the placenta is formed. The continuous release of Progesterone is required because the loss of progesterone contributes to the shedding of womb lining which is called menstruation. This, in turn, prevents an embryo to conceive in the uterus. Here comes the role of HCG medicine, which is also called as the embryonic hormone that ensures the continuous production of progesterone hormone throughout the first trimester of pregnancy.

Apart from ensuring progesterone production from the ovary, HCG plays a crucial role in making sure the lining of the uterus also called endometrium is ready to incorporate the embryo.

Women get HCG from the trophoblast cells that are surrounding the growing embryo after a week of pregnancy. It is believed that levels of HCG in the blood double every 2 to 3 days as the development of the placenta and embryo grows.

HCG injection is used once there is egg follicles is present in the ovary. Your health care specialist will tell you the specific period and time to inject the drug. It is equally important to let your health care provider know about your missing dose at the time of dose adjustments. If you will have sexual activity or intrauterine insemination ovulation happens almost 36 hours later so consider the day of injection and two days following it as your critical days.

Pregnancy test- when to take

Note that HCG is a hormone detected in urine tests. When you take HCG injection, it stays in your urine or blood for up to two weeks. So, if you take a pregnancy test during this period, no doubt it will turn positive as a result of the drug, not the actual pregnancy. Therefore, it is important to wait for at least two weeks from the date you inject HCG shot to make sure the positive results are due to pregnancy and not the medicine.

Numerous brands of HCG injections are available. Your health care provider will prescribe the best that goes with your health status and current condition. An HCG shot is given intramuscularly according to the health care specialist instructions.